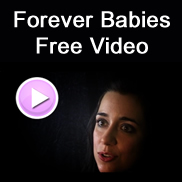 It began with them arguing about a baby. It ended where they never imagined.

For a few years now, people have been talking about the ways the new technology of small digital cameras will revolutionize documentary film-making. Primarily by allowing the camera to get closer to the subject than ever before.

LOSING LAYLA is a documentary spawned by this revolution. With camera in hand, Vanessa Gorman, chronicles her pregnancy journey that surprisingly ends in the death of Layla.

In the days, weeks and months after Layla’s death, the already present camera is witness to some of the rawest scenes of grief ever captured. But grief is only a word that describes the journey of living so many emotions. There are tears and despair, envy and rage but there is also laughter, love and beauty that arises from the depths of every parents worst nightmare.

LOSING LAYLA (60 minute DVD) is an emotional journey that bears witness to a loss that has so often in the past been minimized and seen as ‘less than’ other deaths or losses.   $45


Your Review: Note: HTML is not translated!

Enter the code in the box below: